“Taking a trip for six months, you get into the rhythm of it.
It feels like you could just go on forever doing that”

— Yvon Chouinard
in 180° South: Conquerors of the Useless 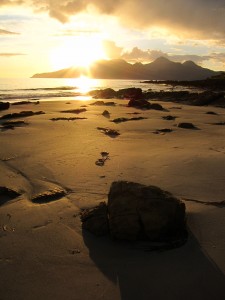 The Isle of Rum, as seen from the Singing Sands beach on Eigg

The idea of staying outdoors long enough to watch the seasons change is very appealing to me, so instead of picking a route and letting the conditions dictate how long it takes, I’m planning to paddle from March to September, and let the conditions dictate the route: if it looks like I’ll finish too early, I’ll be making detours to circumnavigate some of the other nearby islands.

The idea is to see as much of the coastline of the British Isles as I can in one year – this is probably far too ambitious, and in my experience this sort of thing never goes quite as planned, so who knows how it will pan out.   Anyway, as I’m starting in Cambridge, I’ll be heading north for the first couple of days as I paddle down the river until I reach the sea, then I’ll turn right …