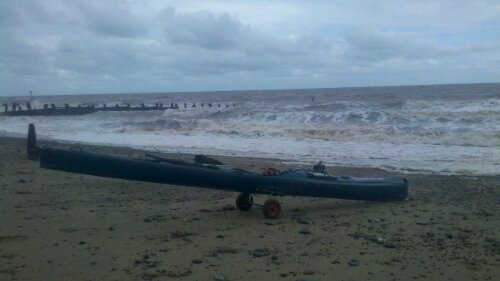 I was tempted to rest today as I was tired and the forecast looked borderline, but it was a tailwind and the Donna Nook range was closed for the weekend … so I went for a paddle.

After trollying the boat back across Withernsea, it was a bit of a tricky launch – I had to wait for a few sets of waves before picking my moment.

Conditions were lively, but the Taran was flying along and I arrived at Spurn Head about an hour earlier than planned.  I managed to dodge the tankers crossing the Humber, but there were also some worryingly heavy breaking waves to dodge as I reached shallower water a few miles from the south shore.

I continued south, staying out in the deeper water until near Mablethorpe where I surfed into the beach and over a sand bar to land in calm water – a good end to the day. 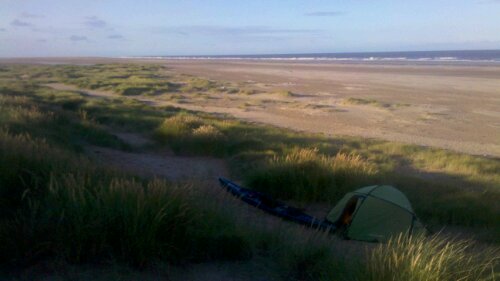 Much stronger winds are forecast for tomorrow, so I’ll be enjoying a rest day camped in the dunes.  Hope the tent survives !