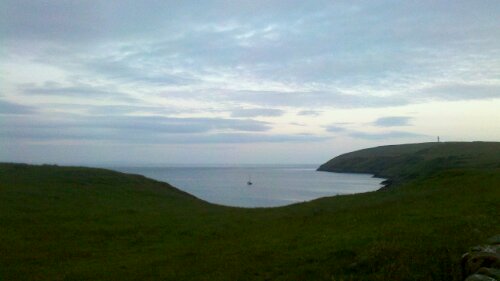 Two long crossings today – 10 miles to Burrow Head, then 20 more to the Mull of Galloway.  I had to paddle against the tide for the first couple of hours so I could make full use of the ebb later.

By the time I arrived at Burrow Head, the tide race was running nicely and I was making good progress, but later on a headwind arrived and slowed me down.

Huge gannets were swooping low at me as I passed Big Scare rock, and I had a couple of porpoises for company.  Unfortunately, the tide turned against me just 4 miles short off the Mull of Galloway, but I made it to East Tarbet … eventually.

I’m a bit apprehensive about going round the headland tomorrow as I’ve been told that it is like a washing machine!

2 thoughts on “Mull of Galloway”