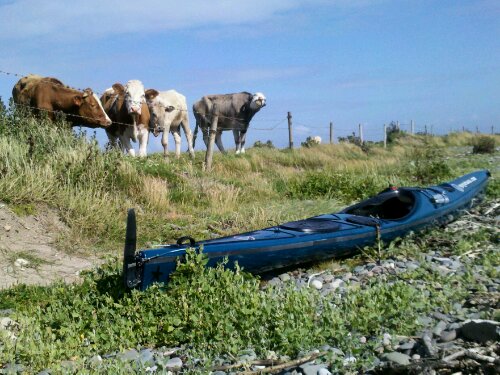 I spent a couple of days on Walney Island while some strong winds passed – resting, eating and repairing my timelapse camera with duct tape and some percussive maintenance (not sure how long that will last).

Today, strong winds were forecast again, but the wind had shifted round to southerly, and I couldn’t resist the prospect of a good tailwind for once.

The sea was pretty flat up to Eskmeals range where I stopped for an hour and a half and range control kindly let me go through during a gap in the firing.

After that, the wind and wave height increased a lot, and although the Taran was flying along, I was feeling a bit anxious about landing in those conditions.

I soon arrived at St. Bees, where a large breaking wave hit me and took me towards the beach.  I capsized on the wave (oops), but rolled up and caught another onto the beach.  Enough excitement for one day – not sure if it was the best decision to go out today, but it was a lot of fun.

Some calmer weather is on the way, so I’m hoping to cover some miles later in the week.