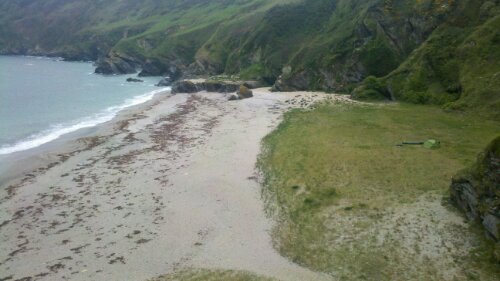 I enjoyed covering some distance yesterday – the Taran was flying along with the wind behind me most of the way.  Passing Burgh Island, then Great Mew Stone and paddling past Plymouth by crossing directly to Rame Head.

After a bit of tanker dodging,  I arrived at Rame head and continued due west into Cornwall to keep south of the Tregantle Range.

Conditions became more difficult later on with some larger breaking waves turning the kayak off course.  I even started to worry that the helicopter overhead for a while was watching me, but was more likely something to do with the Hawks doing some impressive low flying nearby.

I was quite relieved to turn into the sheltered calm of Lantic Bay – a jaw-dropingly beautiful place to stop.

Conditions here are spectacularly worse today, and forecast to worsen, so I could be here for a while, but I’m quite happy to rest here for as long as it takes until the weather improves.