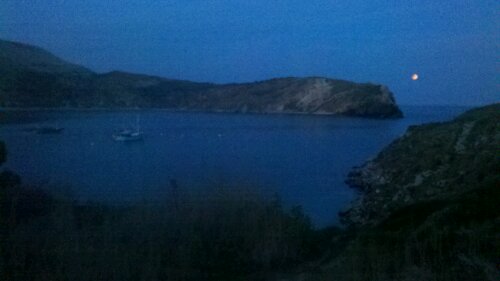 After the Lulworth range had finished firing for the day, I paddled the last five miles onto Lulworth cove.  Now going against the tide, progress was slow.  Visibility was very poor, and it was easy to drift off course if I didn’t keep an eye on the compass.  By the time I arrived at Lulworth, it was so foggy I couldn’t see even see both sides of the entrance as I entered the cove.  A helpful local (fisherman ?) showed me a patch of grass to pitch my tent, and told me I could get a signal on O2 if I   walked to the top of the hill.

The mist soon cleared, and the cove looked beautiful in the moonlight.  Exhausted, I fell asleep while planning the crossing for the next day.

I overslept a bit and was late leaving for Portland.  I paused in a sheltered patch in the lee of the lighthouse for a drink and some food, which was good as it was pretty choppy on the other side.  The strong headwind meant I was frequently getting drenched.

The (clear) range on chesil beach was firing, so I had to wait while the ranger warden stopped firing to let me pass.  The headwind was relentless, and when the tide turned, my SOG dropped to under 1 knot, so I gave up trying to reach West Bay, and I landed on the beach as soon as I found a slightly less steep section.  I’m now camped on the beach near Abbotsbury. 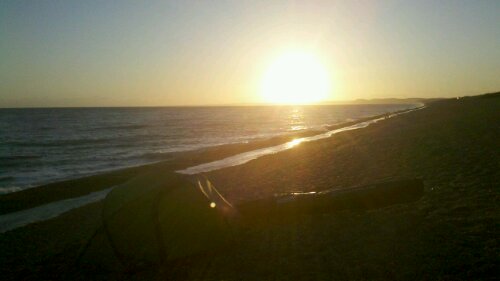