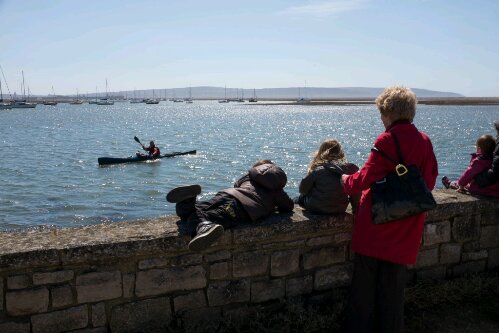 It’s been a busy week, and I haven’t had many opportunities to post an update.

On Monday, strong winds were forecast, so I paddled from Bembridge round the sheltered Solent.  After Cowes, progress was very slow and exhausting into an F6 headwind, and I stopped to camp at a lovely spot near Newtown creek (fortunately, I had marked it on my GPS on a previous visit to the island).

On Tuesday, I only paddled a few miles to Keyhaven, then took the rest of the day off.  I bumped into Martin, the only other sea kayaker I’ve seen on this trip so far – it was good to have chat and have some company for a mile or two.  At Keyhaven, I met with my family (who had come all the way from from France and Devon), so that we could raise a glass or two to my father who would have been 80 this week.  Definitely a highlight of the trip so far.   Cheers, Dad!

On Wednesday,  I continued west, timing my departure with the tide well thanks to the luxury of now being in the area covered my the excellent South West Sea Kayaking guidebook.  The tide race at Hengistbury Head was pretty large and I was slapped in the face by a few steep waves.  Just after Poole harbour, I had a chat with some nice chaps in a rib (SBS, I think), who minutes layer were whisked into the air by a Chinook. 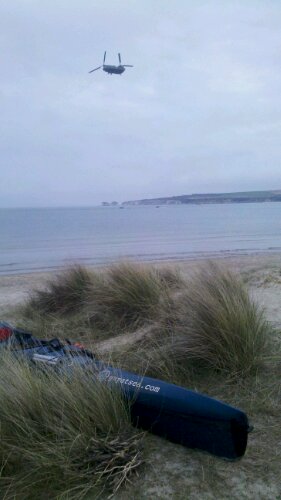 I camped in the dunes at Studland heath, another stunning location.

This morning, visibility was very poor, but the sea was flat calm, so I paddled to Kimmerage.  The fog only cleared a bit as I passed Old Harry rocks, but I couldn’t see much else of the coast.  I’m now waiting for the Lulworth range to finish firing for the day, so I can continue to Lulworth Cove this evening.  I’m currently eating delicious food in Clavell’s Café in Kimmerage village – well worth the walk from the bay.