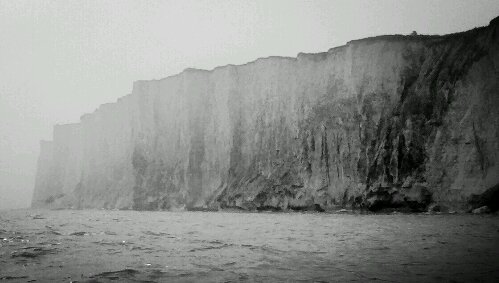 I’ve just had another two days of paddling, and am now onto the south coast.  On Tuesday,  I left Reculver around lunchtime, and made good progress with help from the tide.  It’s good to be able to paddle close to the coast here, with lots to look at along the shoreline – many buildings seem to be teetering on cliff edges, with all sorts of sea walls and defences in various states of repair.

Passing Long Nose Spit just before North Foreland, there was a bit of a tide race, reminding me that the sea temperature is still scarily cold.   I then passed Ramsgate harbour, and stopped before Deal, near Sandwich.

On Wednesday, I left quite early as much stronger winds were forecast for later in the day – this meant slow progress paddling against the tide until Dover.  I felt tiny paddling under the white cliffs, with some large chunks of them crumbling into the sea like Caerphilly cheese.

By the time I arrived at Dover, visibility was pretty poor, with frequent ferries appearing suddenly out of the mist.  I was quite glad when the harbour control insisted that I wait for the pilot boat to escort me across the harbour entrances.

Finally the tide was helping me, so it didn’t take long to pass Folkestone and on to Hythe.  I was hoping to pass the Hythe range while it was closed, but it was late in the day, so I stopped before the range – a good decision as the strong winds arrived just after I got into my tent.

It’s windy today with very poor visibility, so I’m enjoying a day off the water to recover.

One thought on “On to the south coast …”