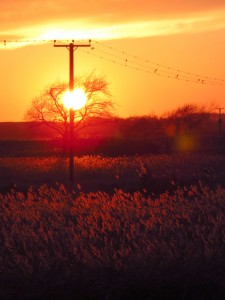 It was a good weekend as the easterly wind finally dropped on Saturday, and I was able to cover some miles.  The tide was going to be against me for much of the day, but I wanted to get as far as possible on Saturday so I could pass the Foulness/Shoeburyness range on Sunday. 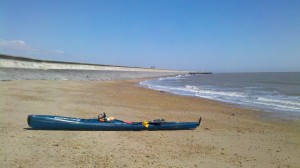 The conditions on Saturday were calm except for a short section passing The Naze.    I stopped for lunch on the beach near Chevaux de Frise Point (Thanks Tim for the tip).   Here I found a spot out of the wind behind the sea wall and with the sun out, actually felt warm on the beach for the first time this year. 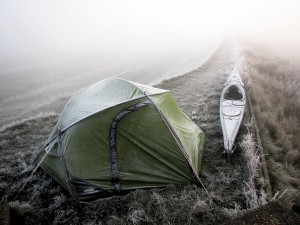 The heaviest frost yet at Holliwell Point.

I was aiming for Holliwell point at the mouth of the River Crouch, but a few miles before arriving I realised that I was paddling up the wrong channel (looking at the view more than the GPS) when I hit a sand bank on the Dengie Flats.  Fortunately as the tide had started to come in by then, so I only had to wait for half an hour before it lifted me over the sand.   By the time I was in my tent at Holliwell Point, it was getting dark, and I was pretty tired after covering about 30 NM. 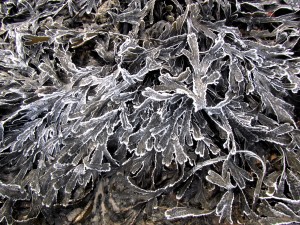 Frost on the foreshore.

It was a very cold night with sub-zero temperatures inside the tent and heaviest frost yet outside.   There was even frost on the foreshore.  Initially visibility was down to about 20m, and I couldn’t see any boats entering and leaving the river mouth, although I could hear them and see their wake hit the shore.  It was all a bit too surreal to really feel the cold.

Once it was just about clear enough to see across the river, I launched, keen to cut across Foulness sands while the tide was in.  The conditions were flat calm, and some seals swam past with the surface tension making a smooth bump in the water over their bodies.  I didn’t get the camera out in time! 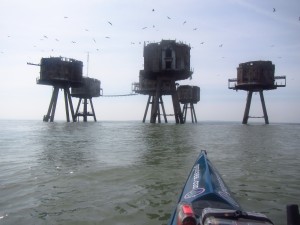 It quickly became much clearer, and I could see the Red Sands sea forts from about 6NM away.  Definitely the strangest place I’ve been on this trip so far.   I felt pretty tired by now, but still had about another 10 NM to get to Reculver.   (I’d paddled out to Red Sands fort once last year from the Isle of Sheppey but wanted to avoid the low tide mud this time.)

As soon as I turned at Red Sands, I saw the wind turbines to the west start turning, and shortly afterwards the easterly wind returned, opposing the tide making rather choppy conditions for the last few miles. Turns out there is a sea wall at Reculver, (it just looked like a path on the aerial photos!), making it difficult to get from the beach to the patch of grass I wanted to camp on.   Never mind.

Conditions are marginal today, and would have meant paddling into a headwind all way to North Foreland, so I’m taking a day off to recover. It is hard to get fitter when I’m spending so much time off the water!

4 thoughts on “Finally crossed the Thames !”