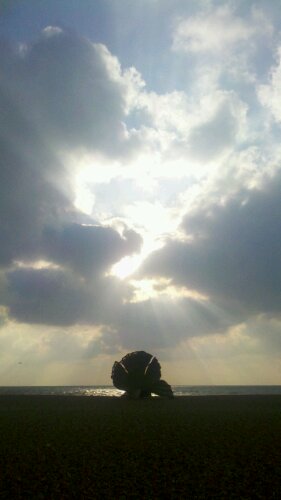 (Photo: The sun almost appears behind the Aldeburgh Scallop).

Well, I’m still in the same spot.  I thought I might paddle today, but the wind was stronger than forecast locally and the sea looked a bit rough, so I stayed on the beach.

The steep shingle beach here has provided me some shelter from the easterly wind while camped behind it, but looks hard to leave while the waves are dumping on it.

I even thought about wheeling my boat to the other side of Aldeburgh, so I could paddle a few miles on the sheltered River Ore, but I think that would be cheating!

Aldeburgh is really quite a small place – I saw a lost hat yesterday, and I knew who it belonged to.

A tent pole broke last night, so I spent a while making a temporary repair this morning.  I hope it lasts until I can get a replacement.

Thanks to Tim who made a visit and shared some of his knowledge of this stretch of coastline – much appreciated!

Lighter winds are forecast for tomorrow, so hopefully I can cover some distance, otherwise it looks like I’ll have to abandon my plans to cross the Thames over Easter while the Shoeburyness/Foulness range isn’t being used.   Fingers crossed !