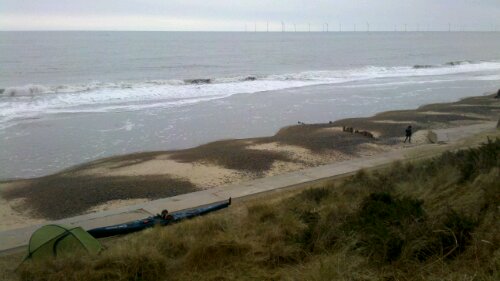 I’m now at California, a bit north of Yarmouth.   It was a lovely paddle yesterday with some sunshine and some swell but very light winds.  I had the company of plenty of seals that followed me for a while, and a porpoise playing in the waves.  There were also lots of seabirds which i’m terrible at recognising, bit I think one of then was a razorbill.

The landing was a bit dodgy though – I met fog just before landing and couldn’t see the beach (although I’d marked what looked like a nice beach to land on the GPS).  As soon as I turned onto a wave, I found the surf was dumping into the beach in front of a sandbar, and ended up dinging the bow of the Taran.  Oh well, I don’t think there is any damage that a bit of gel coat won’t fix.

Today feels a lot more wintry and it is raining, but I’m going to paddle south some more while the winds are light.