Unfortunately, this trip has gone rather wrong before it has really started.   On arriving at the coast after paddling down the Cam and Ouse, my phone kept reporting, “No signal”, so I assumed that there was no network coverage. 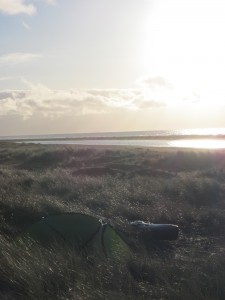 My rather inconspicuous position in the dunes.

The forecast sounded terrible, but I didn’t phone the coastguard as all I could have told them at that point was that I wasn’t on the water and I had no plans to paddle for several days.  However, I did phone home from a landline, explaining the situation, and so I was more than a bit surprised when the coastguard turned up at my tent saying they had been looking for me.

It turns out that I was in coverage, but the phone had broken, and of course, with hindsight, I should have let the coastguard know where I was.  On or off the water.

I’m now carefully proceeding, ensuring the CG always know where I am, carrying three new phones on three different networks, and feeling very red-faced and disappointed that I have unwittingly become a drain on the resources of one of the charities that I had hoped to support during this trip.

7 thoughts on “A bad start”