I’m not trying to break any records on this trip, but because of the huge distances involved, using a faster kayak seemed to make sense – not just to cover the miles, but because in many situations, a faster kayak is safer.  The Rockpool Taran seemed like an obvious choice to me (despite reading some mixed views about its suitability for a UK circumnavigation),  but before buying one, I wanted to convince myself it was really faster than my Nordkapp RM. 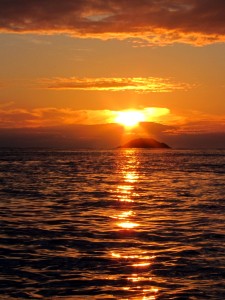 Middle Mouse Island off the north coast of Anglesey – the most northerly point in Wales.

I decided that the 75 mile circumnavigation of Anglesey
would be a good way to compare the Taran to my Nordkapp as I could expect a variety of conditions on the way round and after all, the Rockpool Taran had originally been designed to break the Anglesey circumnavigation record.  I’d never been to Anglesey before, and foolishly arrived without having properly researched the tides.  I also set off from Moelfre later in the day than planned.  As a result, I ended up paddling against the tide most of the way through the Menai Straits, had to wait in an eddy at South Stack for three hours for the tide.  I also had a pretty exciting time going through the tide race at Carmel Head as my arrival there coincided with a strong squall going against the spring tide.  By the time I got back to Moelfre, it had taken me just over 48 hours (including two overnight camps) – some more careful planning was clearly needed !

I returned to Anglesey for the next spring tides, in my Nordkapp again, this time starting from Cemlyn Bay just before dawn.  The conditions were much calmer and very clear – I could see Puffin Island from over 13 miles away before I had even passed Point Lynas.  Things went according to plan for the first half of the route – I passed under the Menai Bridge within five minutes of my planned time, however I ran out of steam a bit after that and started for fall behind schedule.  Strangely, I didn’t see any other sea kayakers on the water all day even though it was the same weekend as the Anglesey Symposium.   I didn’t realise how exhaused I was until I spoke to Holyhead Port on the radio before crossing Holyhead bay and found I could barely string a sentence together.    By the time I returned to Cemlyn Bay, it was dusk and I was so tired that rather than put my tent up, I used it as a pillow on the back seat of my car where I slept through until the middle of the following morning.  Anyway, I’d gone round Anglesey in 16h09m which I thought wasn’t too bad for a plastic kayak.

At the start of June, I went to Anglesey for a third time, and Mike from Rockpool had kindly let me take a demo Taran out for the day.  This time, I started from Porth Dafarch, with calm conditions at the start (shown in the video below).   Once I was out of the lee of the cliffs, there was a headwind that seemed to follow me round for much of the day.

I liked the Taran – by the time I was half way across Holyhead Bay, I was sold on the idea of a boat with a rudder.   It seemed pretty stable, even with waves breaking beam on as I passed Carmel Head.  As far as I know, to time things to make best use of the tide in the straits, you have to be going against the tide as you pass Penmon Point, and the Taran responds well to a bit more effort, allowing me to pass this section quickly.   Despite the conditions being a bit more difficult than the last time, I finished in 13h58m, over two hours faster than in my Nordkapp.  More importantly, I still had enough energy left to go to the Paddlers’ Return for a pint and a bite to eat!

Anyway, I was sufficiently impressed that I didn’t try any other boats, I sold my Nordkapp and bought a Taran.   The same day I collected it, I drove down to Falmouth for the Sea Kayak Cornwall Symposium to hear some talks from people who had kayaked round Britain.   I learnt a lot from the talks, and had a lovely paddle round Lands End in my new boat:

5 thoughts on “The New Kayak”